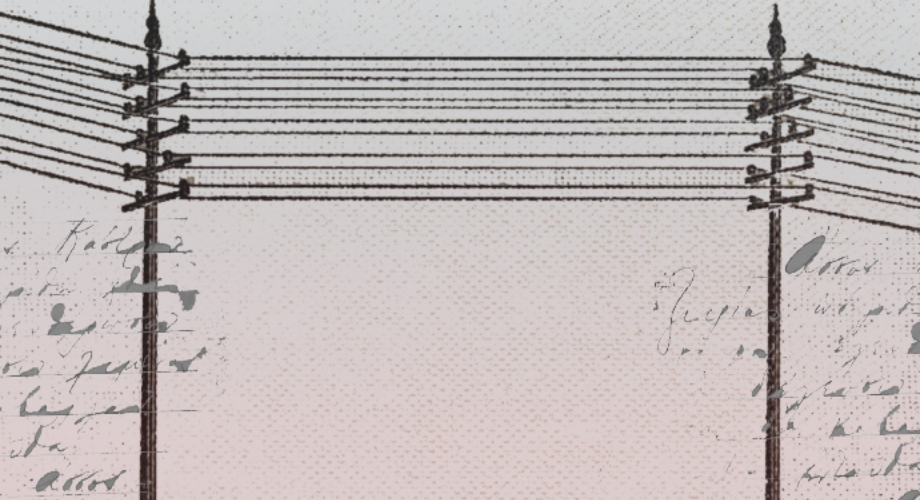 Reading the lives of others

In 1844, Samuel Morse gave the first public demonstration of his invention, sending a telegram from Washington to Baltimore. In 1900, telegraph traffic in just four countries (Great Britain, the U.S., France, Germany) came to half a billion telegrams a year. The telegraph radically changed the way people communicated, got their news, fought wars and managed companies – and even how they wrote literature. The telegraph became a favourite topic among writers in the 19th century, from “telegraph romances” to the stories of Sherlock Holmes.

This is the story of a telegraphist who gets caught up in following other people’s lives through the telegrams they send. Her fiancé wants to move ahead with their wedding, but she prefers to decode the messages exchanged by London aristocrats. One of these aristocrats, the handsome Captain Everard, who “belonged supremely to the class that wired everything, even their expensive feelings,” frequents the telegraph office to arrange his love-affair with an impressive woman, Lady Bradeen, the wife of a wealthy old aristocrat. Our hero, who always remains anonymous, fantasizes that she is a participant in the secret relationship, feeling, from her position, that she is exerting some power over the illicit lovers. The telegrams exchanged by the lovers become ever darker and more mysterious. In the end, the telegraphist learns that the two young people are getting married following Lord Bradeen’s sudden death, and it is revealed the Captain Everard is heavily in debt and not really interested in Lady Bradeen. Disillusioned, the telegraphist decides to leave her telegraph ‘cage’ and marries her fiancé.

In his novella, Henry James employs a suggestive and fragmentary manner reminiscent of telegrams themselves, showing us that the revolutionary nature of new means of communication creatively inspires the imaginations of artists of every era.

Conversation of the lonely switchboard operator with Coppola

A recurring trope in literature and, especially, cinema, epitomised by Francis Ford Coppola’s 1974 masterpiece ‘The Conversation’.