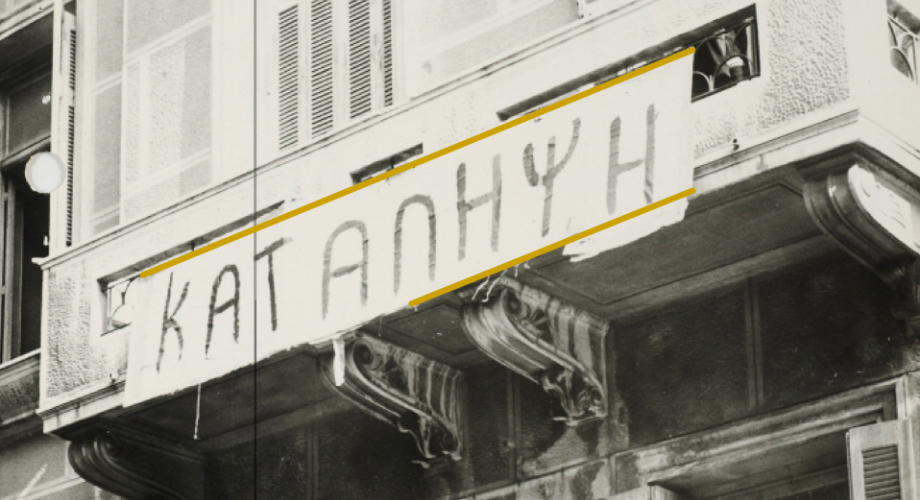 The OTE Telecommunications Museum has a collection of 13,320 telephotographs that cover the time period from 1949 to 1988. The archive consists of photographs taken or sent via OTE’s telephotography service to 35 newspapers in Athens and Thessaloniki, depicting various aspects of Greece’s political, social, athletic, and cultural life. The service served almost exclusively the needs of news reporting photography and therefore its development was intrinsically linked to the world of the Press. Photojournalism from its very beginning was not interested in the distinct details of depiction. It searched for the instantaneous look, faint physical movement, the feeling of a realistic tableau that condenses an important piece of news. And from the moment that photojournalism was connected with current affairs, with an event that was deemed worthy of being recorded or investigated, it is natural for one to expect a story behind each photograph.

This is the case with the image seen above. A two-storey neoclassical house with three people emerging from an open window, and a banner reading “SQUAT”. Museum researchers easily identified the event surrounding the photograph, with the help of the date recorded in the caption (the photograph left Athens for Makedonia newspaper on 10/11/1981). It is three weeks after the elections of the “Change” (regime change) and in Exarchia, at No 42 Valtetsiou Street, the first anarchist squat is taking place. It was a phenomenon occurring for the first time in Greek society and was extensively recorded by the Press at the time, usually in unfavourable terms: “The headquarters of anarchists, drug addicts, homosexuals, and other suspicious elements (…). A homemaker, mother of two, admits that the problem isn’t that there’s a squat. It is that these people are bringing with them today a specific way of life: Drugs, homosexuality, corruption” (newspaper 13/11/1981).

During the “Metapolitefsi’ (regime change), Exarchia transformed into an area in which anarchists were active and alternative culture spread. News reports often highlighted the distance between the “pure” ideological intentions and the violent practices or hypocritical behaviours of youth of a middle-class background. “Apart from a box into which you can drop as much money as you want to support the squat, there is not even the slightest organising as regards the house’s daily needs. The utilisation of the spaces, even with the prospect of creating a primitive form of communal life, has not moved forward. The “squatters” and their visitors mainly listen to rock music and play games. When there is “administrative support” they might get something to eat, too”. (Ta Nea newspaper, 12/11/1981). The squat was dissolved a few days following police intervention.

As the documentation of the telephotograph collection continued, Museum researchers contacted the photojournalist who took the photograph, Grigoris Xanthos, who revealed the identity of the individuals depicted. They are the well known singers and artists who had connected their name to the neighbourhood of Exarchia, and who led parallel lives. They are Nikolas Asimos and Pavlos Sidiropoulos. This was how the research regarding the story of this photograph was completed. There are approximately a thousand unidentified photographs in the Museum’s archive awaiting researchers to reveal their secrets.